From Tempe to La Jolla….

From Tempe to La Jolla…. 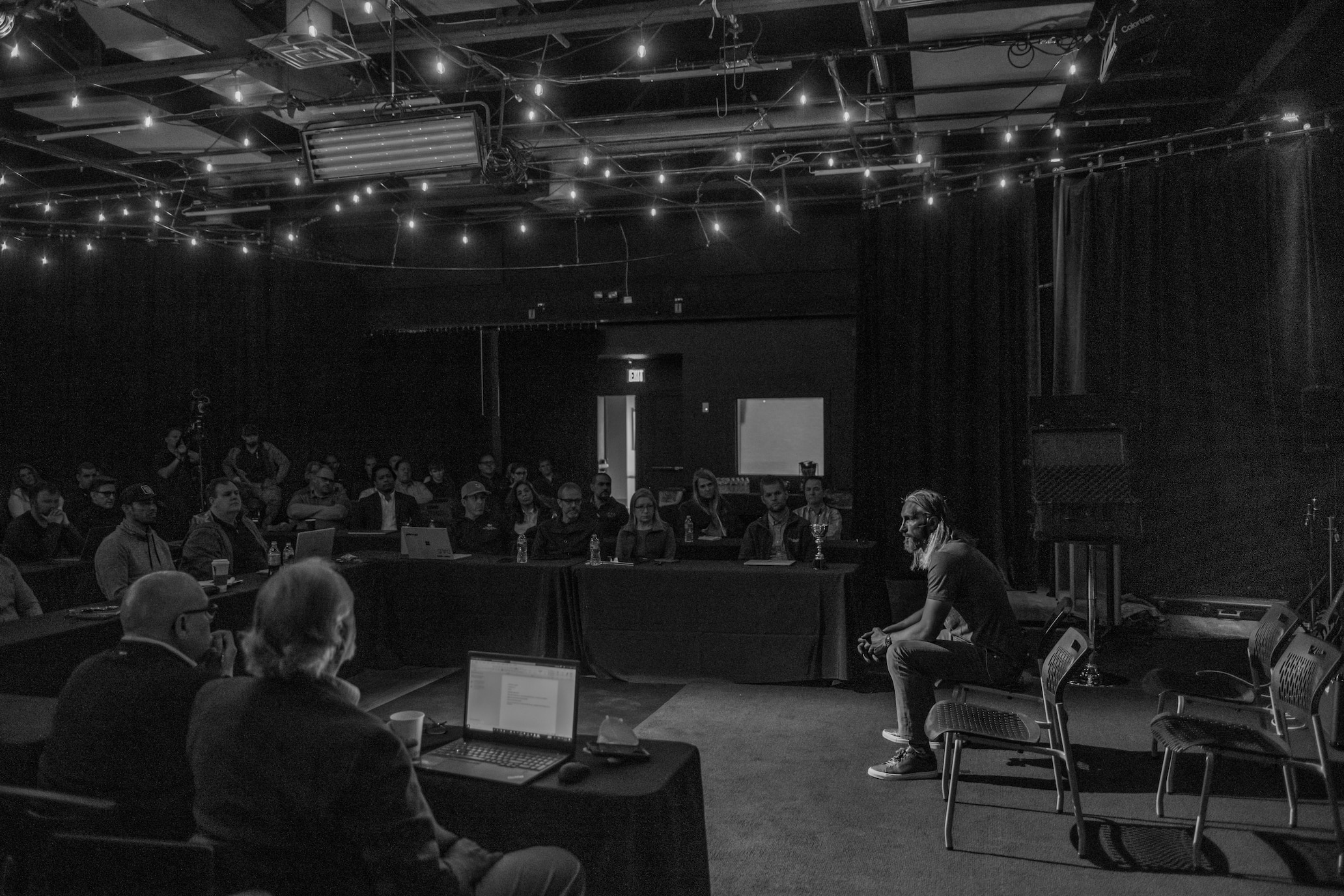 HAVE YOU EVER BROKEN A PROMISE?

Maybe it was a tough situation.

Or fear got the best of you.

Or you were trying to avoid hurting someone’s feelings or being judged.

Maybe it was a circumstance that felt like a no-win and you simply didn’t know what else to do.

Recently, I made myself a promise.

Stop censoring myself and be fully expressed.

Growing up in Utah, I’ve always censored myself to some degree.

Especially as a businessman, speaker, and now… as a comedian.

Within days of making this promise, I was immediately tested, confronted, and challenged.

The circumstance came down to censoring myself in order to get more people to attend a stop on my comedy tour.

SHOULD I SELL OUT TO SELL OUT?

That is the question I kept asking myself.

I could either sell out the upcoming comedy show at the Tempe Improv, a 275-person venue, keeping it PG-13 so one of my promoters could have more Mormon/LDS people attend, or keep it rated R and potentially have fewer people there.

It was a week before the show, and I was going back and forth on what to do.

What would it be? I couldn’t decide.

INDECISIVENESS IS A SILENT, LONELY TORTURE.

Alone with my thoughts and running from my emotions.

It is nearly impossible to be present when I suffer the future.

Carrying worry about something and focusing on what would happen that night, speculating.  Back and forth, back and forth.

The more thinking I did, the more I started to justify censoring.

It was only a few days earlier in Las Vegas where the promise was made.

The Coming Together tour was kicking off with my friend and prenominal comedian Ian Stanley.

I chose Las Vegas as the date to start the tour because I booked an amazing corporate gig in the beautiful Chelsea Theater at the Cosmo hotel.

This corporate gig paid well. It may be the most fun I’ve had doing corporate comedy (versus headlining a club). And even better, I was able to roast the founder and my friend Ron Carson.

By the way, roasts may just be my favorite part of comedy.

Ron was a great sport as I made him stand center stage for 15 minutes (I’ve included a link to the roast below this post).

Before roasting him, I did almost half an hour of comedy. I also, sprinkled in some tax content for the crowd of financial professionals.  I navigated and even tested the boundaries of the audience. I joked with them, telling them laughing at the jokes on the edge didn’t make them bad people – ha.

It was a wonderful group and so much fun.

I felt connected and happy with my performance.

The next night, I was even more free.

A club I had done the year before on my previous tour – The American Ream.

I chose to tell more stories and just let it flow.

This was the most crowd work that I had ever done and it went very, very well #humblebrag.

Ian and I started the show telling the crowd we named it “Coming Together”, because in a world divided, it was time to have comedy connect us. Laugh together, put our differences behind us, and keep it simple – leaving the controversy at the door. Then we immediately said we would talk abortion, masks, vaccination, and politics… and laughed. That was not the plan, just a funny way to start the night.

I had college friends come out to support me. People who attended the year before. Friends flew in, and others drove from hours away.

I was fully expressed.

It was one of the first times I talked about being raised Catholic in Utah and that my father’s side of the family was Mormon royalty.

I didn’t always feel fully loved or accepted by a few people on my dad’s side of the family. My Aunts and Uncles are so fun, so loving, but with some of my grandparent’s extended family, it seemed like I had to earn their love.

So, this was a night of healing while having fun.

For example, if you have spent casual time with me in person, you are likely to know that I love to swear, but you may never know this from my videos and books.

This night, I just let the words flow as they chose to appear.

I informed the crowd that my great-great-great grandfather was a President of the Mormon church…sorry, Latter Day Saint as they like to be called (most of my Mormon family is more latter day than Saint).

It was fun, healing, and in flow.

The night was filled with energy, celebration, and laughter.

Now, back to the set in Tempe.

There are a lot of Mormons in Arizona and the year before, kicking off my American Ream tour, six of them left when the comedian who opened for me started with some jokes about weed and swore.

I remembered that moment.

It haunted me just before I stepped on stage. I told the promoter it was rated R, but still ended up censoring anyway.  The thought of pleasing the minority entered my mind.

FEAR TOOK OVER AND IN AN EFFORT OF NOT AFFENDING SOME, I HELD BACK FROM EVERYONE.

Not the best formula for comedy… or life.

I broke my promise.

I didn’t tell anyone about this promise, I made it to myself.

Breaking it robbed me of my joy, of my expression, of my play.

The set was fine.

I got laughs. But it wasn’t Vegas.

I knew what I had done and felt down and disappointed about it.

The first tour I had packed the house in Tempe, but this year, it was only half full.

Nothing robs the present and suffocates happiness like comparison and CENSORSHIP.

Like thieves, they sneakily enter, and leave a feeling of betrayal, a hollow emotion of emptiness, followed by a feeling of heaviness.

I don’t know how to exactly explain it, as it’s beyond my expertise, but emotional pain often leads to physical pain.

It happened for years when I felt imperfect or that I had disappointed my mom as a child, or my wife in my adulthood, leading to my neck giving out, unable to move or turn it, and distracting me from the emotion I might otherwise feel. Then it moved to my shoulder, even my back, and finally, after Tempe Improv… my hip.

Crazy. I could barely stand.

I didn’t do anything physically that would have created the sharp, burning pain in my hip. But from the time I flew home on Monday until Wednesday morning, it was deteriorating quickly. On Thursday, I couldn’t sit in my truck and on Friday I couldn’t stand or put pressure on it.

I knew this was emotional.

As crazy as it sounds to some, there are books like ‘The Body Keeps the Score’ that illustrate how this is possible.

I have had less than ideal sets.

My rehearsal the night before I filmed my special wasn’t great, no let me be clear, it was flat out bad.

But this time it was different.

It took me to the final song at a Kendrick Lamar show I had just attended, where he played the piano and repeated ’You can’t please everybody” over and over before exiting the stage.

BY TRYING NOT TO OFFEND OTHERS, I BETRAYED MYSELF.

Sometimes pain can be a gift, part of the process, even if we don’t like the wrapping.  And that’s what this was.

It led me to meditate, journal, and get clear about the cost of living anything less than my best life.

A week later, I find myself in La Jolla, another chance.

I have headlined the La Jolla Comedy Store 3 times before.

Each show erupting in a standing ovation.

Some of my favorite moments on stage.

This is my home away from home.

The perfect place for redemption.

But this time would be different than the previous three.

Those I had rehearsed for hundreds of hours. Writing, re-writing, and rehearsing every day.

This time it was different.

The key… no rehearsing.

No writing a set.

No set list or 3×5 notes in my pocket or on the stand.

Just before I walk on to stage, I’m thinking of what brought me there that night. A wedding.  When the save the date was sent, I reached out to Scott Shore, the owner, and asked if October 6th was open for me to headline. I planned the comedy set the day before the rehearsal dinner and two days before the wedding.

So, I say exactly what I am thinking:

“I’m here for a wedding, I’m the best man. Kinda surprised, crazy he asked me… considering I fucked his sister… I mean, sure, I married her, but still”.

Yeah. Just shared what was on my mind for the next hour. Two or three times I ended up using jokes that from the past as I wasn’t 100 percent sure where to go next, but they landed, the whole set landed and I was present.

Two bits were out there, and I wasn’t sure how they might land in the moment, but ended up being best jokes of the night.

AND, my hip wasn’t hurting.

The lower part of my leg was tingling a bit though, as if the pain was escaping, or moving down and out.

So, have you broken a promise?

What was the cost?

For me, the cost was physical pain and disappointment.

But the pain led me to examine, to heal by taking time to think. Recommit.

To how I show up in the world.

The pain in my hip felt serious, and a bit overwhelming.

But it led to meditating daily.

It led to writing.

It led to forgiving myself, accepting what happened, and loving it all.

Let go, surrender, and for me, give it up to God.

These are the main tenets my meditation mentors teach me – take responsibility, L.A.F (forgive, accept, love), and meditate.

The pain led to the inner work.

It led to listening to my intuition.

To having consequences with my actions that led to learning.

In this, the pain was a gift.

Reflecting, doing the inner work, and was the catalyst to being present, expressed, and fulfilled.

Learning lessons is part of living.

Learning to listen to our inner voice can be difficult.

Finding our purpose and staying congruent with who we are is not an easy path, but the one that is fulfilling.

I had a path to heal, a process to learn, and a shorter path to fulfillment. It is called Win, Then Play.

WHAT HAPPENS WHEN YOU KNOW YOUR WIN?

When you win before you begin. When you find a life you don’t want to retire from?

Win, Then Play is a new way of thinking, a different way of living. Where you don’t have to compromise or sacrifice today for the promise of a better tomorrow.

Be your best you. Uncensored. Expressed.

Change the game by inventing a new one. One where you enjoy life along the way.

Want to know more on how to Win, Then Play?

This is my life’s work and a culmination of a quarter of a century of insights, strategies, and frameworks coming from research, mistakes, mentors and moments of genius.

About the author : Garrett Gunderson

My commitment is to radically change the way you look at money so you can keep more of what you make and build a life you love.